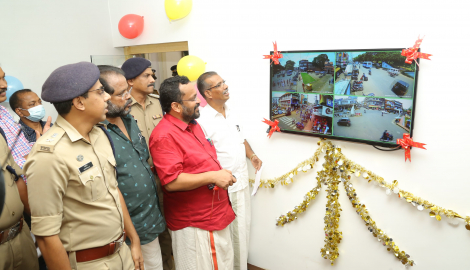 The third eye of the Thrissur City Police to prevent crime.

It was actually a turning point.

By monitoring the CCTV cameras, the CCTV system can be used not only to reduce crime in the city of Thrissur but also to streamline the city's transport system and deploy police on major events including Thrissur Pooram.

Today, the CCTV camera network of the Thrissur City Police has become the largest and most powerful police security system in Kerala. Cameras set up in the city transmit the footage to the police control room via high-speed optical fiber network cables. Specially trained police officers are deployed here to enable 24-hour police surveillance.

In the second phase of the CCTV camera system, cameras were installed at the Outer Ring areas of the city such as Sankarayya Road, West Fort, Poonkunnam, Patturaikkal and Ashwini Junction at a cost of `20 lakh from the own funds of the Kerala Police. The camera system set up by traders' associations, shopping malls and voluntary organizations in Thrissur district is also being gradually integrated into the police network.